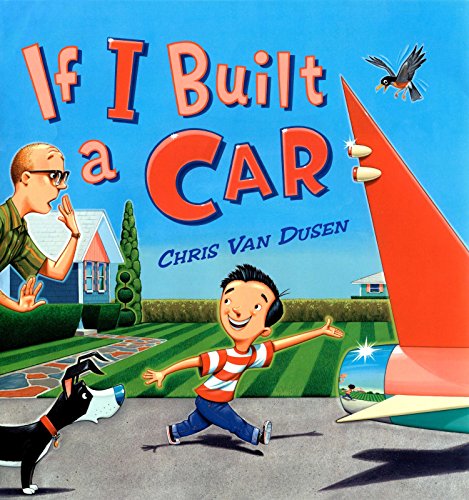 If I Built a Car

Rhyming couplets and illustrations in colors as shiny and sleek as the four wheels they celebrate present the musings of a boy growing up in the placid 1950s suburbs. As Jack, his father and the family dog drive by trim lawns and plastic pink flamingos in a red, wood-panelled station wagon (that "is OK," according to Jack, "Nothing great. Nothing grand"), the young hero regales his staid-looking father with a description of the car of his dreams. Next, Jack lies on a shag rug in his bedroom, an issue of on the bedside table, as he studies his toy Wienermobile, the inspiration for his own "spectacular car"—which, on the subsequent spread, seems to magically appear in the driveway. From there, the story takes off: Jack gives his amazed father and eager pooch a tour of his vehicle, showing off the "flush fender skirts and retractable wings," enclosed fireplace, swimming pool and snack-bar, and introduces the automated driver, Robert the Robot. The boy then takes his dad for a ride through the neighborhood and onto the lake ("The fenders will float like a catamaran") and underwater ("Just hit !") before heading back to town, where a crowd of neighbors applauds. The finale returns readers to the opening scene, where a smiling Jack proudly tells his father, "If I built a car, that's just what I'd do." Energetic verse and jubilant, action-packed artwork make this tale of a young inventor's fantastic daydream a joy ride. Ages 3-up.