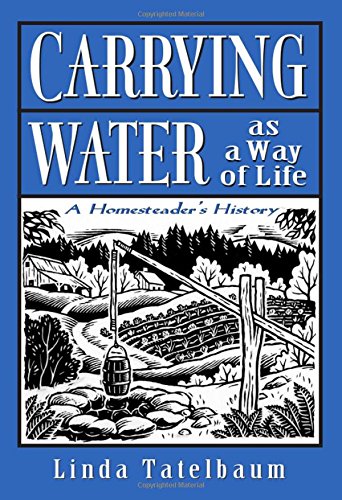 Carrying Water as a Way of Life: A Homesteader's Story

In the mid-1970s, when the New Hampshire college where she was an assistant professor collapsed, Tatelbaum and her husband, her former dean, joined the homesteading movement in Maine, buying 75 acres and living in an old pink trailer until they built their own house. Spiked with humor, this engaging, true-grit memoir of a self-described ""old hippie"" is graced with homespun yet unsentimental observations of town meetings, black flies, developers, an old well, bean suppers, the country store, the language of trees. Currently an associate professor of English at Colby College, Tatelbaum taught classes and raised a son while pursuing a human-scale, self-reliant lifestyle, carrying water each day from a stone spring, composting, growing her own food organically and living without electricity for years. Her family eventually compromised with modern civilization, installing photovoltaic solar panels to power their TV, computers and VCR, yet her strenuous personal quest for the simple life rings true and sincere, and her lyrical log sounds a passionate plea for ecological sanity. This is the first title from a small press founded by Tatelbaum and her husband. Photos. (Apr.)
close
Details