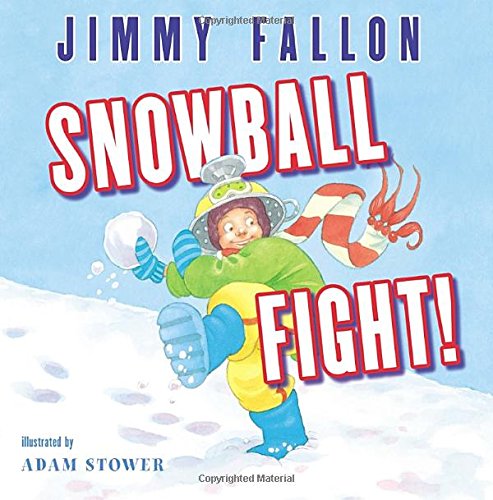 With simple, exuberant rhyming couplets set to a driving meter, the star of follows a boy (who bears a striking resemblance to a young Jimmy Fallon) on a snow day. The hero bundles up, dashes out ("No time for breakfast,/ already late./ Pretend I don't hear when Mom yells,/ 'Wait!' "), and builds a fort in anticipation of the title event. There's a tense moment when the outcome looks dark ("Out of ammo/ trapped in fort./ Enemy approaching,/ need support"), but the hero's little sister—whom Stower ( ) depicts as not only adoring but also non-pesty—comes through in the nick of time. Fallon's grown-up fans, who might expect a tale punctuated with irony, may be disappointed. This book (inspired by the song "Snowball" on his album, , according to the jacket flap) is straight-up nostalgia, a paean to a childhood so idyllic that Stower can actually get away with showing kids who wear pots and colanders as snowball-fighting headgear. Any mischievousness falls under the conventional boys-will-be-boys category, such as a parting shot of the hero sneaking to the freezer with "one last snowball [for] future use." Although the compositional focus on many spreads feels diffuse, Stower's watercolors, featuring pug-nosed, wide-eyed kids, exude an old-fashioned winter friskiness. Ages 4-up.