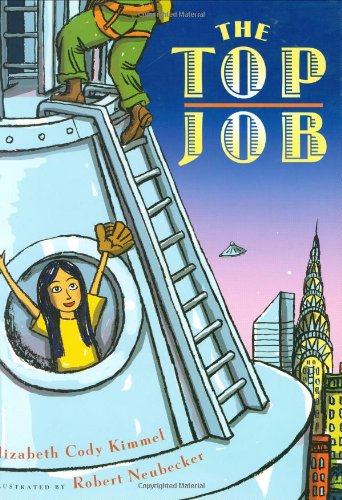 It looks like the nameless narrator will have to take a backseat to the other kids on Career Day; their parents are astronomers, NASCAR drivers and jewelers, while her dad changes lightbulbs. But as the girl launches into her spiel, a different sort of lightbulb goes off as it dawns on the class that her father’s job is pretty special after all: he’s in charge of the beacon atop the antenna of the Empire State Building. Kimmel’s ( ) speaks with authority because, as she explains, she actually accompanied Dad on his task the previous weekend. Kimmel has amassed a host of details, which she skillfully spins for her audience. The bulb is “about the size of our beagle’s head but 620 watts brighter” and Dad better not drop it, because when he’s at the very top, it’s “one thousand four hundred fifty-three feet and eight and nine-sixteenths inches to the sidewalk.” (The narrator brings a catcher’s glove to the hatch below the antennae, just in case.) Neubecker equally deftly builds the story’s visual momentum, alternating spot illustrations with full-page pictures (a vertiginous, bird’s-eye view shows Dad at work); in a vertical spread, the re-lit landmark virtually glows. As he proved in , Neubecker’s signature style can conjure up metropolitan magic; his ink outlines and punchy colors instantly convey why New York is a helluva town. Ages 4-up.