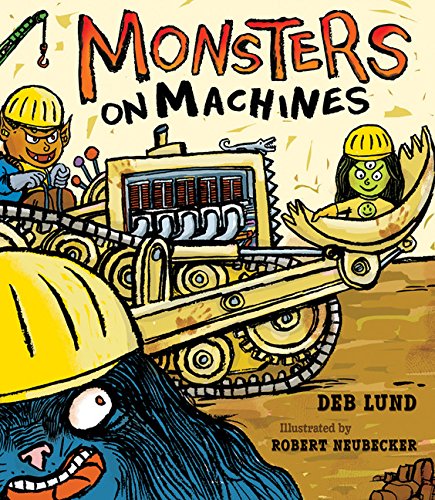 Lund's ( ) rhyming story, about a team of ghoulish monsters who ride bulldozers and cranes, has just about everything a child could hope for, from fantastical characters to vehicles, from muck and mud to screams and shouts to “monsteroni and cheese.” The plot is uncomplicated—a crew of monsters builds a “Custom Prehaunted” house and then cleans up—and relayed with plenty of brio: “Foreman Gorbert stomps over. He's huge and he's hairy./ He grunts out the orders and adds, “Make it scary!” Neubecker's ( ) bright, digitally colored full-bleed pictures of the workmonsters—Dirty Dugg, Stinky Stubb, Gorbert and Melvina—are reminiscent of Maurice Sendak's Wild Things, but rendered in an electric palette. A monster mama serves lunch, reads a story and oversees naptime, then withdraws: this quartet, apparently, doesn't view tidying up as fiendish (“Without too much whining, they each do their share”). The fun extends to the endpapers, which feature monsters in construction machines. Ages 3–7.