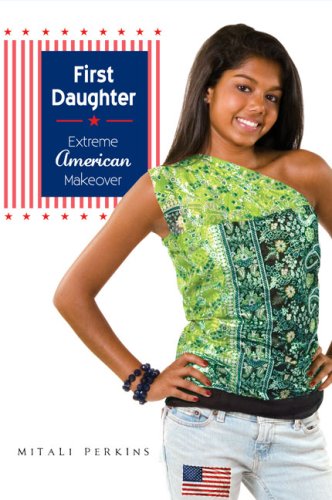 For 16-year-old Sameera “Sparrow” Righton, star of the first title in Perkins’s ( ) First Daughter series, life on her father’s presidential campaign trail is anything but easy. In addition to worrying about the paparazzi snapping photos of her at inopportune moments and appearing supportive of her parents at all times, Sameera has to do everything in her power to look good—and (because she’s both adopted and Pakistani) as American as possible. So when the campaign PR guru suggests a makeover in order to spruce up her image (a new wardrobe, a more confident walk, a more stylish 'do) Sameera reluctantly agrees. But the supposedly benign plan morphs into an attempt to change her personality and tone down her outspoken views (“You need to use 'uh-huh a lot more.... And giggle as much as you can.”), and Sameera decides to reclaim her true identity, even if it costs her father the Presidency. Although it touches upon racial profiling, trafficking and prejudice, the book mostly concerns itself with Sameera’s transformation. Even before her makeover efforts, Sameera is an intelligent, witty and prepossessed heroine (and an inveterate blogger, with an actual site maintained at ). Though the story tends toward the lighthearted, teens should enjoy this peek at the behind-the-scenes finessing that goes on in modern politics. Ages 12-up.