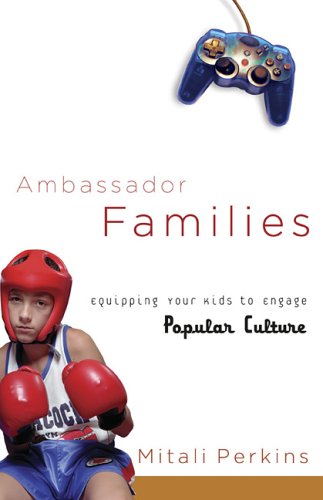 Using the analogy of Christian families as "ambassadors" to a sometimes hostile popular culture, Perkins offers a workbook featuring a middle-of-the-road media philosophy, case studies for reflection, and discussion questions designed to help parents decide where to draw the lines for their children's media consumption. When Perkins speaks of diplomacy, she knows what she's talking about. A visiting professor of international relations at Pepperdine University Perkins was born Hindu and lived as a child in India, Ghana, Cameroon and other countries before immigrating with her family to the U.S. She is also a YA novelist ( ) and mother who carefully monitors her children's media diet. With Jesus as the model of diplomacy, Perkins urges Christians to follow his lead by boldly trekking through "Samaria"—a land of outcasts to first-century Jews but a symbol in this book for popular culture—spreading healing and wholeness in the land. "The diplomatic strategy is clear: in rare cases, ambassadors retreat to safe places, but we never stop seeking to exert influence in an unfriendly realm." Although the metaphor of popular culture as a mission field or dangerous foreign land will likely have more appeal for conservative Christians than liberal ones, Perkins invites all Christian parents who worry about popular culture on an intentional journey with her "from hostility to hospitality."