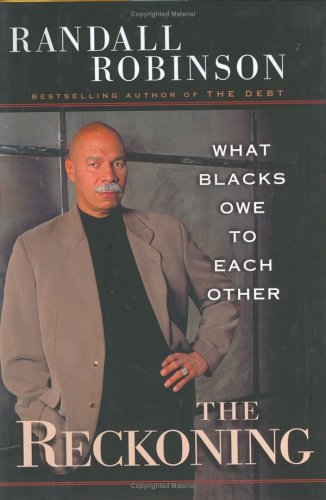 THE RECKONING: What Blacks Owe to Each Other

With the bestselling , Robinson, founder of the policy group TransAfrica, became a prominent voice for U.S. slavery reparations. Rather than a follow-up to , this book reads like a similarly impassioned extension of it. Robinson, in his powerful, polemical style, finds that "246 years of slavery and the century of government-embraced racial discrimination" have produced a devastating legacy for young African-Americans: "We are still . The chains are inside us now. They turn our spirits mean, our hearts into metallic chambers.... They render our memories empty, our vision short, our song coarse, our fathers broken, our mothers bereaved." His prime example here is the criminal justice system, and the spine of this rather diffuse book is the story of Pee Wee Kirkland, who became a criminal (and basketball legend) growing up poor in 1950s Harlem, but who ultimately reformed. Along the way, Robinson makes some compelling points: the criminal justice system is disproportionately black and poor, prisons benefit poor white communities and Caucasian white-collar criminals get treated more gently than black convicts from the street. He criticizes fellow blacks for supporting politicians like Bill Clinton who he thinks furthered such injustices. As with the previous book, Robinson is short on practical analyses, but despite being less about what blacks owe each other than about the injustices continually in the offing, this book-length lament may further liberation.