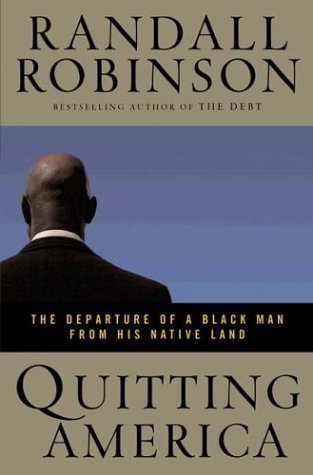 QUITTING AMERICA: The Departure of a Black Man from His Native Land

Founder of the humanitarian group TransAfrica, Robinson has been eloquently angry in his calls, including and , for America to recognize the depredations suffered by the descendants of slaves. Part meditation, part rant, this book takes off from Robinson's move to the Caribbean island of St. Kitts (his wife's home country), but he has hardly mellowed. The book's first part is titled "Five Hundred Years of White Crimes and Self-Absolution in the Americas," contrasting the modest, decent nature of life in St. Kitts with a wealthy, harsh, racist, complacent America. Regarding violence, for example, "Americans only ask: who? Never: why?" The book's second part is a Chomskyesque essay of political manipulation regarding Iraq. The third circles back to contrast cash-obsessed America and the social goals of places like St. Kitts and Haiti, which, despite their modestness, are grounded in the commonweal of all. Robinson makes casual checkable errors (a proposal to put a U.S. base on St. Kitts did make the U.S. press) as well as more profound ones: the pronouncement "Only white countries are capable of killing so many at one time" immediately raises the specter of Rwanda. But incontrovertible wrongs fuel Robinson's ire: the U.S. government protects Haiti's leading human rights violator; slavery defender Robert E. Lee is widely commemorated; President Bill Clinton helped wreck the Caribbean banana trade during the U.S.–Europe feud over imports in 1999. Adding it all up, Robinson sees the difference between the status of blacks in America and blacks he sees in St. Kitts as the result of the "post-slavery American experience." Readers will find it difficult to disagree.