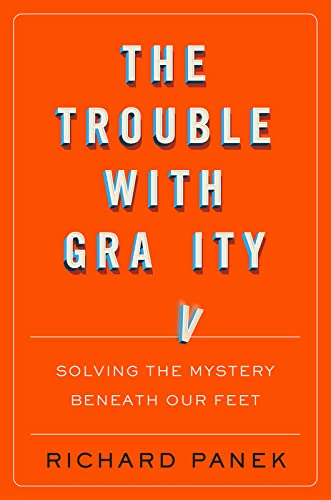 The Trouble with Gravity: Solving the Mystery Beneath Our Feet

Science writer Panek (The 4 Percent Universe) examines evolving theories of gravity in this thought-provoking volume, rounding up “the usual suspects—Aristotle, Newton, Einstein” to reconstruct their preconceptions and interrogate their conclusions. From the rigid spheres-only cosmology of Aristotle, which forced mathematicians to try to manipulate “the math down here to match the motions up there,” to Copernicus’s equations introducing the “possibility that Earth was a planet like any other,” to the experiments of Galileo establishing that a rolling ball “sped up at an unvarying rate,” Panek demystifies early investigations of gravity with easy humor and a philosophical bent. In contemporary theories, readers learn “the velocity of light is finite in [James Clerk] Maxwell’s equations, too, but it’s also, crucially, something else: constant,” which, in the 1860s, shifted the paradigm once again. Ultimately, he observes, Aristotle’s view of the universe held sway for two millennia, while “Einstein’s lasted less than a decade,” thanks to the introduction of quantum mechanics. Panek’s inquisitive, fine-tuned narrative is full of character and, unlike many other books on physics, imbued with the friendly casualness of a coffee-shop chat. As such, it will delight both lay readers and serious students. Agent: Henry Dunow, Dunow & Carlson Literary. (July)
close
Details