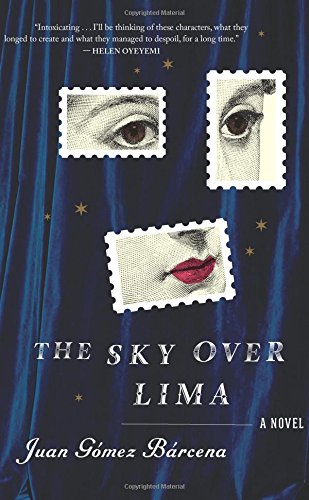 The Sky over Lima

In his first novel, Bárcena draws on a real-life literary hoax to craft an intriguing tale of transatlantic catfishing. Carlos, the introverted son of a vulgar rubber baron, and José, the swaggering scion of one of Peru’s most illustrious families, are two rich friends who fancy themselves poets, “playing at being poor in a Lima garret.” On a lark, and in hopes of securing a copy of his latest book, they strike up a correspondence with the Spanish poet and the real-life future Nobel Laureate Juan Ramón Jiménez, by posing as an earnest, besotted young woman, Georgina. Jiménez takes the bait, and so twice a month a ship carries letters between the imaginary muse and the pining poet, missives that miraculously escape the clutches of the boat’s letter-gnawing rat. As Georgina becomes the protagonist of a serial epistolary novel within Barcena’s novel, the young men struggle to flesh her out: whom to model her after, what to reveal and what to conceal, and what genre her story will ultimately belong to. The self-referential novel drives home, a little too insistently, the fictional nature of life and romance: “everything is literature... the entire world is a text constructed of words alone.” However, Bárcena grounds the literary games in a richly detailed, early 20th-century Lima and its cast of secondary characters: dock workers, prostitutes, café-haunting literati. Its lightly ironic tone darkening as it proceeds, the novel sensitively explores how a literary prank shapes the sentimental, romantic, and moral education of Carlos, the more genuine of the two fraudsters. (May)
close
Details