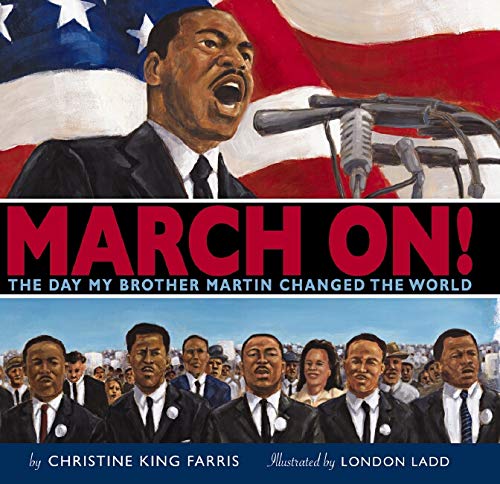 March On! The Day My Brother Martin Changed the World

Describing the 1963 March on Washington, Farris, the older sister of Martin Luther King Jr., maintains the deft touch and down-to-earth perspective that made My Brother Martin so moving. Where most books on King approach him with a sense of great occasion, Farris more effectively uses plain language and well-chosen facts to explain her brother’s extraordinary achievements. Her description of his writing of the classic “I have a dream” speech typifies her style: Martin stays up all night, working and reworking his draft. “Not once did he stop to eat, or even lay his head down on his pillow.... Even if he’d wanted to sleep, he couldn’t—the words of his speech kept him awake. His speech wouldn’t let him rest.” As she chronicles Martin’s experiences of the march, Farris skillfully embeds facts about its goals, the participants and the period. Ladd, in his first picture book, demonstrates a rare talent for portraiture—even the faces in his crowd scenes are individuated. Like Farris, he resists the temptation to lionize his subject: instead of looking iconic, his King looks human—in other words, capable of inspiring the reader. Ages 9–12. (Sept.)