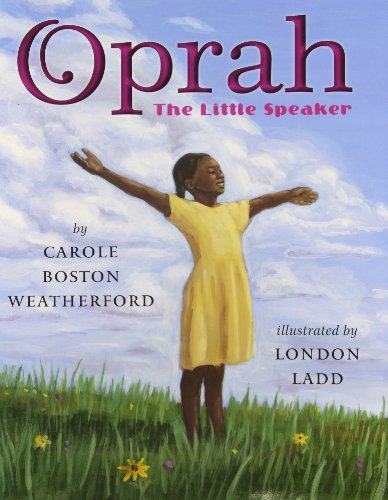 Written in punchy, fragmentary sentences, Weatherford's ( ) profile of Oprah Winfrey's preschool years underscores the values and ambition that fueled her success. Living with her grandparents in a rundown Mississippi house without indoor plumbing, Oprah performs her chores shoeless, “Her only shoes, for Sundays. Weekdays, barefoot.” Tutored by her grandmother, depicted as both disciplinarian and softhearted matriarch, Oprah was reading at age three and soon began reciting biblical passages in churches. Frequent references to God's presence in her life are used to almost beatific effect (“ ”). The inspirational message comes through clearly, and Weatherford shows both the good and the bad sides of Oprah's upbringing, though the story closes on an oddly smug note, as Oprah's grandmother calls her over as she washes laundry. “ 'Come watch, child; you'll need to know how to do this someday.' And Oprah said to herself, 'No I won't.' ” The girl's drive and her grandmother's strength emanate from Ladd's ( ) bold acrylic paintings, which feature closeup, lifelike portraits. Ages 4–8.