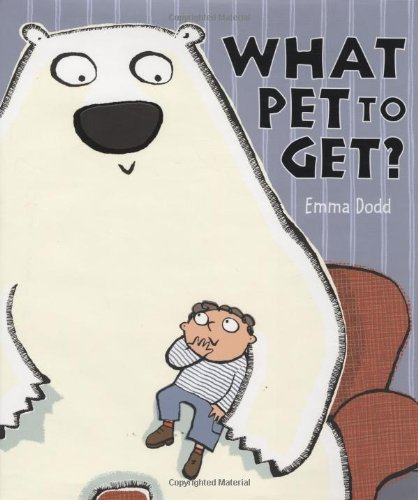 What Pet to Get?

Young Jack wants a pet and proposes a host of possibilities, from an elephant (“I could ride it to school”) to a T. rex (I could take it for walks”). Mom, unseen, gently but firmly squelches each candidate; she effectively counters Jack's suggestion of a polar bear by conjuring up an image of it having a hot flash in the living room (“I don't suppose it would like the central heating,” she says mildly). The premise is shopworn, as is the wrap-up (Jack ends up with a “lovely little puppy” so huge that it occupies a horizontal gatefold), but both get a big boost from the computer-assisted cartooning on these exuberantly oversize pages. Filling in her thick black outlines with a mixture of digitally manipulated textures and densely saturated colors, Dodd ( ; , reviewed above) creates a daffy, winning cast of googly-eyed creatures whose ids run rampant. The T. rex's hide seems to be made of netting and camouflage, while an ungainly rhino appears to be upholstered in gray Naugahyde. Lots of fun. Ages 3-5.