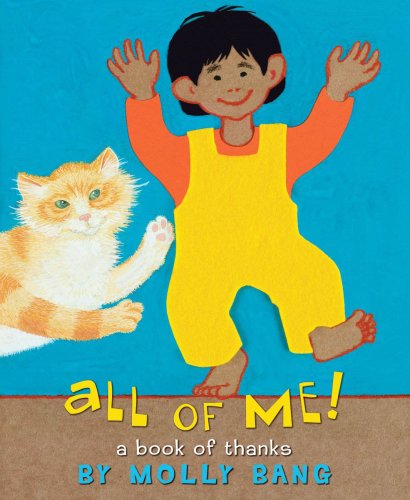 All of Me! A Book of Thanks

A child celebrates his body, senses, emotions and surroundings in this lyrical story, illustrated with crayon, paint and collage art on brown paper bags. Simple images of a boy with yellow felt overalls contrast with finely detailed renderings of his cat and the collaged objects that inhabit his world. Several pairs of the boy's hands are shown petting and playing with the cat: “What grand hands! Thank you, hands, for gripping and throwing and patting and holding. And for hugging.” Crayon lines extend beyond the frame of some pictures, suggesting a work in progress, creation in the making. Caldecott Honor artist Bang ( ) amplifies this notion in a concluding note about how she created this book, encouraging kids to make their own (“Don't forget to make a cover!”). At times, the book feels like a game for parent and child (“I smell with my... nose,” reads the text as pie, cheese and other odiferous objects float above in a starry sky), but the overall effect is that of a joyful, grateful prayer. Ages 3–5.