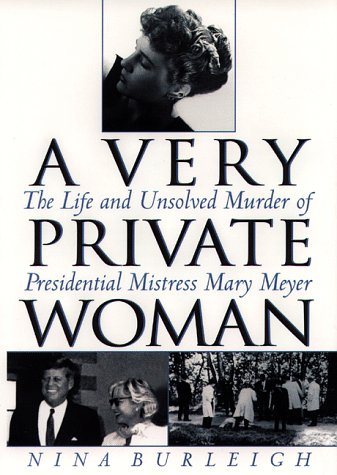 This past July, freelance journalist Burleigh confessed, in the pages of Mirabella, to playing footsie with Clinton on Air Force One. Later, in a Washington Post story, she publicly offered to fellate the president ""to thank him for keeping abortion legal."" Contrast this with the politesse of Burleigh's subject, Mary Meyer, who was able to conduct an affair with President Kennedy and still get invited to dinner by Jackie. If Burleigh didn't learn discretion from her study, she still does an admirable job of conveying both the restrictive milieu of official Washington in the 1950s and early '60s (at least where women were concerned) and the personality of one woman who was, for a time, able to dictate the terms of her own life. She was born Mary Pinchot to a prominent Pennsylvania family in 1920 and, after attending Vassar, married Cord Meyer, a natural politician who resigned himself to a life behind the scenes. Burleigh repeats allegations, first published over 20 years ago, that Mary Meyer turned JFK on to marijuana and quite possibly LSD. Other notables in the book include abstract artist Ken Noland, who was Mary's lover; CIA counterintelligence chief James Angleton; acid guru Timothy Leary; and Mary's brother-in-law, Washington Post editor Ben Bradlee, who was instrumental in destroying Mary's diary after her 1964 murder. Though the title bills Mary's murder as ""unsolved,"" Burleigh is forced to conclude that the man brought to trial, Raymond Crump, is the likeliest suspect and was acquitted because a spirited defense caught the prosecution off guard. Despite the absence of new information on the conspiracy front, Burleigh's biography is an excellent study of both its subject and its time. (Oct.)
close
Details