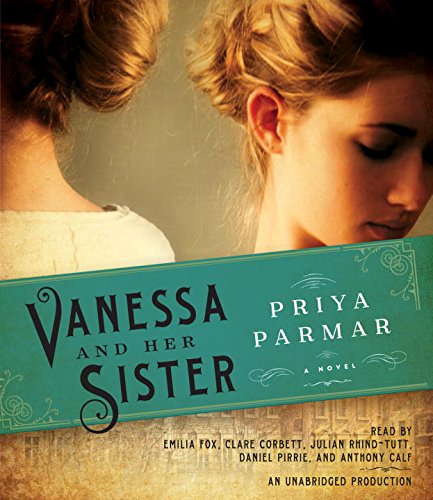 Vanessa and Her Sister

Before becoming the celebrated writer Virginia Woolf, young Virginia Stephens lived with her sister, Vanessa, and her brothers in the Bloomsbury neighborhood of London, where they surrounded themselves with other artists and intellectuals. Told in diary entries and letters, this novel captures that period, characterized by emotional upheavals and family crises as well as intellectual and artistic conversations. Emilia Fox is perfect in the role of Vanessa, whose point of view dominates the story. Fox captures Vanessa’s feelings of responsibility and exasperation toward her sister, her mixed feelings about her suitor Clive Bell, and her earnest desire to be a serious artist. Julian Rhind-Tutt is likewise excellent as family friend Lytton Strachey: flamboyantly gay, full of lively gossip, prone to self-deprecating humor, and passionately longing for a man he cannot have. Daniel Pirre and Anthony Calf both offer serviceable, straightforward narrations in their respective roles as Leonard Woolf and Roger Fry. The one misstep is Clare Corbett, who is cast as Virginia, the baby of the family and described as brilliant and witty, but also childish, immature, wild, reckless, selfish, prone to fits of hysteria, and actual madness. In narrating Virginia’s chapters, Corbett’s voice is deeper than the voice of other female characters, with a crackly quality and an overly posh accent, all of which make her sound like a middle-aged woman, not the childish 20-something girl she is supposed to be. The effect is jarring. However, only a handful of chapters are told from Virginia’s point of view, so it does not detract too much from the rest of the narration, which is excellent. A Ballantine hardcover. (Dec.)
close
Details