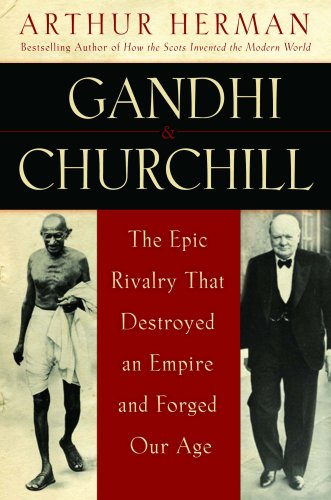 Gandhi & Churchill: The Epic Rivalry That Destroyed an Empire and Forged Our Age

Historian Herman ( ) paints a forceful portrait of the emergence of the postcolonial era in the fateful contrast—and surprising affinities—between two historic figures on opposite sides of the struggle for Indian independence. Churchill and Gandhi, both elites in their respective milieus, began their careers with remarkably similar perspectives and trod intersecting paths across India, South Africa and England. They shared an obsession with physical courage (albeit channeled in different ways) that tied conceptions of masculinity to larger ideas of racial identity and moral superiority—and India loomed large in their triumphal careers, ultimately frustrating both men’s idealism. While Herman’s dual biography artfully depicts the personalities of the two men, he gives short shrift to the more complex forces of British imperial decline, Indian nationalism and the emergence of the postwar order (for example, Herman helpfully but also too neatly explains the dogged centrality of India and the British raj in Churchill’s worldview as an act of filial loyalty to his beloved father) But the author also takes careful account of the constellation of modern and antimodern currents of late Victorian thought in situating these vastly influential figures in a fascinating narrative of their times.