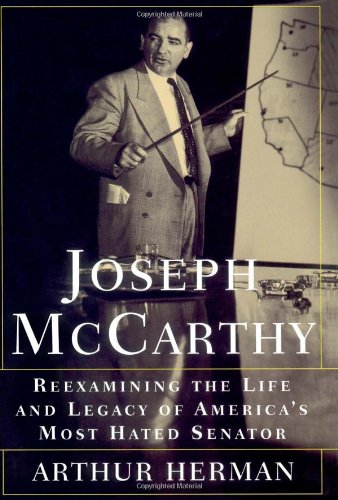 Joseph McCarthy: Reexamining the Life and Legacy of America's Most Hated Senator

Given recent revelations from Soviet-era archives and new thinking about the Cold War, this biography was probably inevitable. Readers can therefore be thankful that Herman, a historian at George Mason University, has given us an occasionally strained but generally fair study of McCarthy rather than a one-sided defense or assault on him. The book will surely be controversial and subject to attack from all sides, for its author insists that we must hold McCarthy's enemies and victims to the same standards to which we hold him. McCarthy himself was as much a phenomenon as McCarthyism. He rocketed from local Wisconsin office directly into the Senate, where he was quickly marginalized by the defenders of that institution's decorum, which he then scorned and attacked. Depicted by Herman as a reckless, uninformed, publicity-seeking, hard-drinking, mocking man, McCarthy doesn't easily evoke sympathy. But Herman successfully situates the anticommunist zealot in his place and time and among his opponents and supporters better than anyone before him and (by conjecturing cautiously, for example, that he suffered from hypomania) helps us understand, if not honor, his methods and their consequences. In arguing that McCarthy was ""always a more important figure to American liberals than to conservatives,"" Herman opens new avenues for understanding American liberalism, as well as McCarthy's own Republican Party, in the 20th century. Unfortunately, he fails to provide a full picture of the man--husband (of Jean Kerr, critically important to McCarthy's career), father, sometime bon vivant. Nevertheless, Herman's book is an important contribution. (Dec.)
close
Details