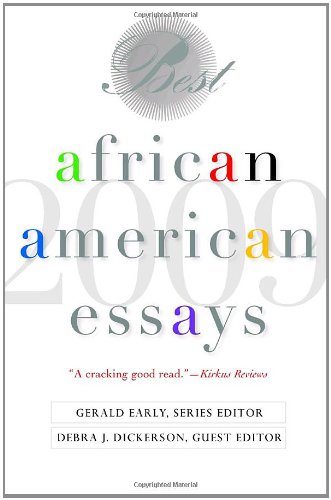 Under six broad rubrics (e.g., “Entertainment, Sports, the Arts,” “Sciences, Technology, Education,” “Activism, Political Thought”), Early and Dickerson have assembled previously published essays by nearly 30 writers. James McBride recalls how he “sidestepped” hip-hop “the way you step over cracks in the sidewalk,” and his realization that “I missed the most important cultural event in my lifetime.” Uzodinma Iweala urges a redirection of Western media concerns away from “campaigns, [that] however well intentioned, promote the stereotype of Africa as a black hole of disease and death.” Barack Obama is the subject of two essays and the author of one, which reflects on “the mutual suspicion that sometimes exists between religious and secular America.” Malcolm Gladwell is instructive in discussing the Flynn effect (“that average I.Q.s shift over time”) in the black-white I.Q. gap. The editors are inclusive: three essays are by “non-African Americans on African American subjects” and the well-known mingle with the unfamiliar. Flat moments are few, and Bill Maxwell’s heartbreaking account of teaching at a black college in Alabama and Emily Raboteau’s “Searching for Zion,” on the Beta Israel and African Hebrew Israelite communities in Israel, rise to particularly affecting heights.