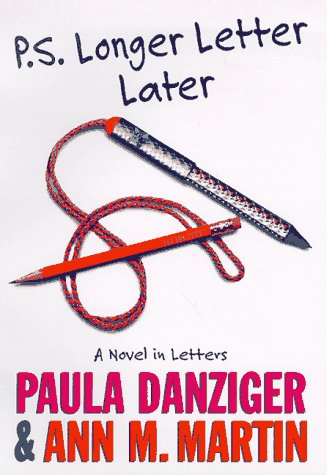 If Danziger and Martin had been childhood pen pals, their correspondence might have read much like this strikingly insightful epistolary novel. Each known for a finely tuned ear to her audience, the venerable authors here do a splendid job of creating a story based on the letters exchanged between 12-year-old best friends, one of whom has just moved to another state. The authors' distinctive voices give the collaboration a rare spontaneity and realism. Impulsive, outgoing Tara*Starr streaks her hair purple, can't resist a pun, pens an irreverent column for her school paper and fancies creme-filled, frosted doughnuts with sprinkles. The whole-wheat variety is the doughnut of choice for quiet, thoughtful Elizabeth, who enjoys cross-stitching, launches a poetry journal at school and isn't quite ready to pierce her ears. Tara's life, which had been chaotic prior to her move, hits some unanticipated twists: her mother and father--who had Tara at 17--begin acting like parents for the first time (taking steady jobs, setting rules around the house) and her mother becomes pregnant. Elizabeth, meanwhile, whose life was quite predictable and steady, faces cataclysmic change when her spendthrift father loses his job, struggles with alcohol and abandons his wife and daughters. Her crises spawn some moving passages, including her response to Tara's ironic complaints that her life is ""a shambles"" because snow postponed the school play; ""It better turn around soon,"" writes Elizabeth, ""Your life is the only good one I have."" Readers will also readily identify with Tara's confessions of inadequacy about how to console Elizabeth (e.g., ""Zounds! Zounds! Zounds!/ A million times Zounds!/ I don't know what to say. Your news is soooooooo awful!""). Even when the girls argue and the time between letters grows, readers can appreciate what goes into the erosion and rebuilding of friendship. Given Danziger's and Martin's penchant for continuing story lines, readers can only hope that this will be an ongoing correspondence. Ages 10-13. (Apr.)
close
Details