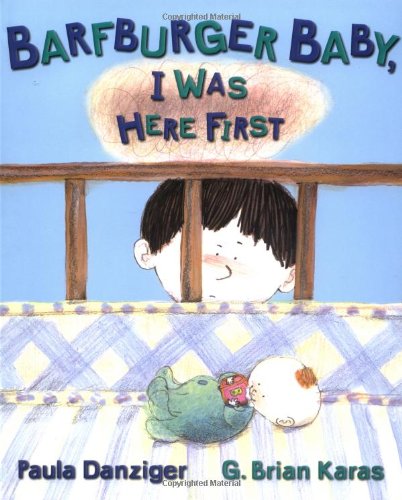 BARFBURGER BABY, I WAS HERE FIRST

One-sided sibling resentment, rather than mutual sibling rivalry, drives this prickly picture book by the late author Danziger. As the grumpy title implies, five-year-old Jonathon resents his newborn brother, Daniel. "Daniel has gunk all over his face. He looks like he spit up a space blob," Jonathon observes. "He's just a Barfburger Baby." Under his breath, Jonathon insults Daniel on the basis of bodily functions (and, to be sure, readers will adopt choice terms like "Poopburger Baby" and "Snotburger Baby"). He hates to watch his parents, relatives and neighbors cooing at the infant, even though they bring him gifts too, and he bridles when they call him by a childish nickname, Jonathon Pookie Bear. " ... double ," Jonathon growls, angry to be treated as both big brother and little kid. Danziger's conclusion, however, brings relief from an unexpected source—Jonathon's cool older cousin Charlie, who has younger twin sisters. In Karas's ( ) moody illustrations, the hero sports a mop of heavy dark-brown hair and a gray shadow across his sullen face; black pencil scribbles define his expressive eyebrows, and a telling pink blush spreads across his nose. Danziger and Karas make palpable Jonathon's fist-clenching frustration, but end with the strong implication that he'll warm up to his sibling role. Ages 4-8.