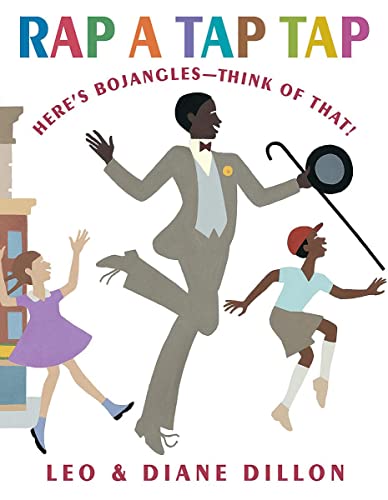 RAP A TAP TAP: Here's Bojangles—Think of That!

In a departure from their recognizable illustration style, the versatile husband-and-wife team here uses a striking gouache painting technique that pays homage to Harlem Renaissance artist Aaron Douglas to craft an exuberant picture-book tribute to African-American tap dancer Bill "Bojangles" Robinson (1878–1949). Brief, rhyming text introduces the tall, lean and dapper man who "danced in the street" and "made art with his feet." In keeping with tapdancing tradition, each line of verse returns to a rhythmic refrain ("Rap a tap tap—think of that!"). The deceptively simple text conveys the complexities of the era: "He danced past doors; some were open, some closed" accompanies a montage of entryways, with some people welcoming Robinson, but a white man closing his door. On the other hand "folks in fancy clothes" depicts whites and blacks together outside a show. Most spreads exude the everyday joys of a bustling city neighborhood, and the bouncy beat will hold the attention of even youngest readers. A short biographical note appears at the end of the book. The cubed-looking apartment buildings, an elevated/subway train, store fronts and traffic lights suggest Manhattan (eagle-eye readers will notice an obscured sign for 125th Street), but the scenes are general enough to lend the art a universal, timeless feel. The Dillons cleverly depict Robinson's fast-flying feet with varying shades of the same color around his legs, creating a sense of movement with a shadow/silhouette effect. The graceful figure he cuts on the page is a hoofer's delight. Ages 3-up.