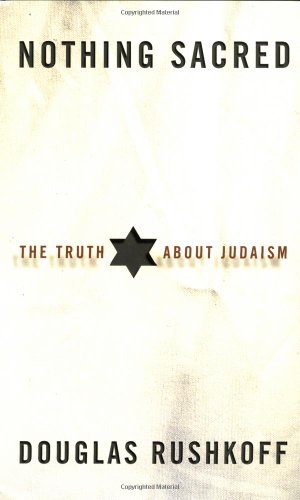 NOTHING SACRED: The Truth About Judaism

A self-styled "media theorist and social commentator," Rushkoff has written and lectured extensively about interactive technology. Here he applies Judaism to his questions about the Internet, since "Judaism is a religion dedicated to media literacy." Although he calls himself a "lapsed Jew," he spent a year studying relevant texts, attending synagogue and talking with rabbis and teachers. His findings are set forth in this book, which is, disappointingly, a repetitious and contentious polemic. Rushkoff believes that Judaism is a do-it-yourself religion based on iconoclasm, abstract monotheism and social justice. He examines and re-examines these ideas, commenting on Jewish history in general and American Jewish history in particular. He insists that Jews have to raise questions about Judaism rather than follow synagogues and Jewish organizations in their preoccupation with issues of assimilation and inter-marriage. In addition to criticizing what he calls "institutional Judaism," Rushkoff rails against Jewish mysticism and efforts to reach out to unaffiliated Jews as vain attempts to rescue Judaism from its "cultural sinkhole." He argues for a "renaissance" that would provide an "ethical, intellectual and spiritual template," creating a "dimensional leap"—vague terms that are all overused in this book. He repeatedly asserts that Jewish holidays and rituals are "borrowed and adapted," and that "in Judaism, nothing is sacred," thus opening the door to education and exploration. To facilitate such endeavors, he concludes with a useful discussion of sources for further research.