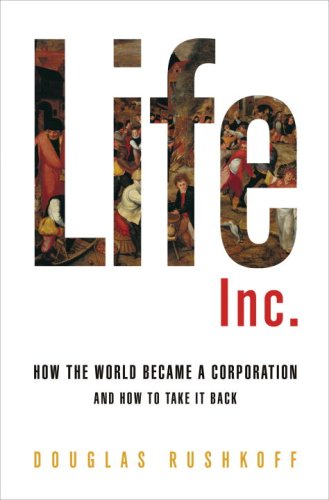 Life Inc.: How the World Became a Corporation and How to Take It Back

Rushkoff ( ) offers a shrill condemnation of how corporate culture has disconnected human beings from each other. An engaging history of commerce and corporatism devolves into an extended philippic on how increasing personal wealth and the rise of nuclear families constituted a failure of community—whose services are now provided by products and professionals. While he makes some good points—for instance, about how some laws are now written to favor the rights of corporations above the rights of human beings, and the phenomenon of pro-wealth spirituality as espoused by , Creflo Dollar and Joel Osteen—he skews wildly off-course lamenting how “basic human activity... has been systematically robbed of its naturally occurring support mechanisms by a landscape tilted toward the market’s priorities.” His unsupported and flawed assumption that societal interdependence is a natural or even preferable state for all people, everywhere, his disdain for filthy lucre and joyless recasting of independence as “selfishness” will leave readers weary long before the end.