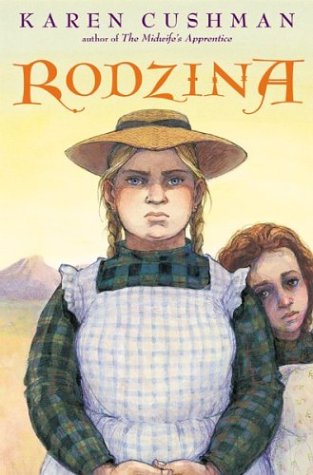 After taking on medieval times in and , Cushman here follows another feisty heroine as she makes her way West on an orphan train. Narrator Rodzina Cara Jadwiga Anastazya Brodski (who is "big for twelve and every day getting bigger"), starts out with 22 other orphaned children in Chicago, and the novel ends as her train pulls into Oakland Station in California. The author packs a lot into the intervening chapters, often at the expense of character development. A few of Rodzina's fellow riders stand out, such as pretty (but "slow") Lacey, who attaches herself to Rodzina, and Mickey Dooley, who introduces himself as "Orphan, purveyor of blarney, and a genuine bag of laughs." Although many of the train stops are a blur, a memorable scene takes place in a dugout east of Cheyenne, where Rodzina briefly finds a foster home with the Clench family (until she discovers that Mr. Clench plans to wed her); the details of the Clenches' claustrophobic, filthy conditions make for the most palpable setting in the book. Miss Doctor, as Rodzina refers to the female physician who acts as a guardian for the group, sees through Rodzina's tough façade and enlists her to care for the youngest of the orphans. But the development of the relationship between Miss Doctor (who, by her own admission, comes across as "cold and frosty") and Rodzina stumbles and, consequently, the ending of the novel rings hollow. Ages 10-14.