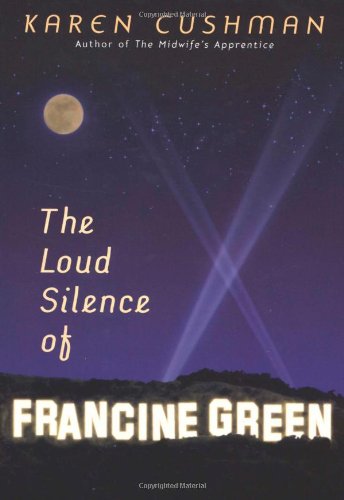 The Loud Silence of Francine Green

Cushman takes on many issues in this novel set in Hollywood at the peak of McCarthyism, unfortunately diluting the power of any one of them. As the book opens, narrator Francine learns that her neighbor Sophie Bowman will be joining her eighth grade class at All Saints School for Girls. The deliciously named Sister Basil the Great, the principal who doubles as their teacher, quickly singles out Sophie as the student to hold up as an example, sentencing the girl to stand in the wastebasket throughout class. Cushman draws parallels between the strict authority of the Catholic school and the constraints of McCarthyism on everyday citizens. Sophie's father, a screenwriter, allows readers to see the havoc wreaked upon his peers (one, a Jewish actor being shadowed by the FBI and pressured to give up names, commits suicide), and the Russian owners of a vandalized local store voice the irony of their situation ("That's why Petrov and I left Russia, to get away from such thugs"). Yet these connections may be a bit abstract for some readers, who will more likely respond to details of Francine's daily life—taking her younger brother past Newberry Five and Ten, ordering root beer floats at Riley's or having a crush on Montgomery Clift. The author introduces the idea of Sophie's tendency to egg on controversy but never fully develops it, and Francine remains quite aloof from the world. She is less sympathetic than Cushman's previous memorable heroines (in ; ). Ages 10-14.