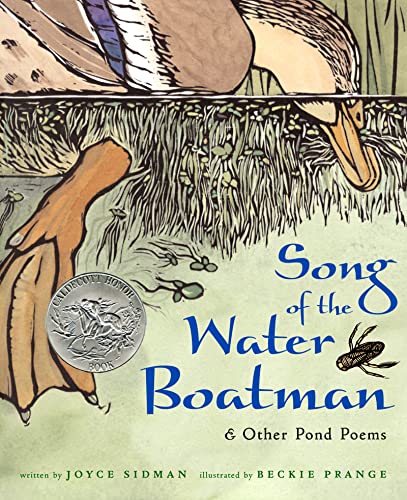 SONG OF THE WATER BOATMAN: And Other Pond Poems

This remarkable collection of Sidman's ( ) poems about the flora and fauna found in wetland areas also occasions the book debut for naturalist and printmaker Prange, whose artwork recalls the grace and narrative finesse of Mary Azarian. The poems and hand-colored woodcuts combine whimsy with naturalistic accuracy, and crystal-clear side-bars filled with enough factual oddities to intrigue young readers provide ideal accompaniment. For instance, two almost-identical water bugs—the water boatman and the backswimmer—trade stanzas in the title poem as if they were yeomen on a 19th-century schooner: " ,/ / ." Nonetheless, the rhythmic ballad informs readers about the differences and similarities between the two insects without sounding the least bit didactic. "In the Depths of the Summer Pond" neatly creates a "House That Jack Built" explanation of the underwater food chain. Each denizen of the pond is closely observed in both art and text, which brim with intriguing characterizations and vivid imagery. Separated into four "movements," "The Season's Campaign" chronicles the cattails in springtime, which "burst forth,/ crisp green squads/ bristling with spears," while in summer, their "brown velvet plumes/ bob jauntily." Prange's illustration features a sky tinted with subtle shades of blue and lavender with a "red-winged general" (aka blackbird) circling the fall cattails whose "courage/ clumps and fluffs/ like bursting pillows." With its unique combination of fact and fancy, this book is bound to delight pint-size scientists and environmentalists—and language lovers, too. Ages 5-10.