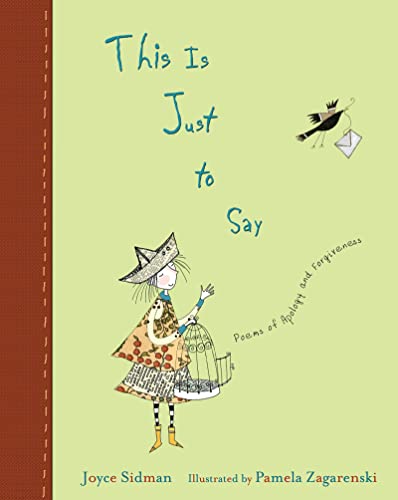 This Is Just to Say: Poems of Apology and Forgiveness

Sidman ( ) explains, via an introduction from one of the book's sixth-grade characters, that the poems contained in this often humorous and touching anthology were inspired by the title poem of apology, which was penned by William Carlos Williams. The student in Mrs. Merz's class who introduces the book explains that some of the students received answers to their "sorry" poems. One pair of poems shares a spread and addresses a dodge ball exchange ("Sorry/ Reubs,/ for belting you/ as hard/ as I could/ in dodge ball/ I'd like/ to say/ I wouldn't/ do it again/ but I'd/ be lying"). But for most entries, unfortunately, in order to read the call-and-response in succession, readers must awkwardly flip from the first half of the book ("Apologies") to the second ("Responses"). Yet the poems successfully navigate the complicated terrain for those who seek forgiveness. In one especially moving poem, "The Black Spot," Alyssa tells her sister Carrie that the black spot of lead on Carrie's arm makes manifest the "nugget of darkness" within Alyssa that propelled her to injure her sibling (Carrie's response conveys her enduring anger at Alyssa). Zagarenski's ( ) inventive mixed-media illustrations brim with items found in a classroom: a dictionary entry on "apology," for instance, becomes part of a student's clothing, and white hole reinforcements resemble a character's stolen doughnuts. But the book's odd organization seems a missed opportunity to tie the well-wrought, corresponding poems together and reinforce the complex relationships between the characters. Ages 9-12.