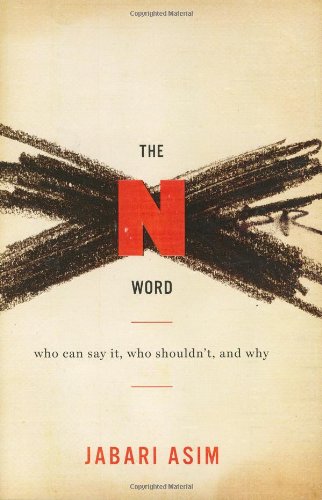 The N Word: Who Can Say It, Who Shouldn't, and Why

Midway through columnist Asim's history of the "N" word in America, readers may conclude it should not be uttered by anyone, anymore, for any reason. Essentially, this 400-year chronology is an exhaustive history of white supremacist ideology, showing that the word is as American as "liberty, freedom, justice and equality." He sweeps over this sensitive and contradictory terrain—including black Americans' use of the word—with practicality, while dispensing gentle provocations. Asim notes, for example, that popular civil rights presidents like Thomas Jefferson, Abraham Lincoln and Lyndon B. Johnson used the word all the time. Bicycling in Africa in 2004, a young black American encounters a black-owned hip-hop clothing store called "Niggers." Children growing up during the latter half of the 19th century sang "The Ten Little Niggers" nursery rhyme. Asim is at his best when offering his opinion—"in the 21st century, to subsist on our former masters' cast-off language... strikes me as... an immense, inscrutable, and bizarre failure of the imagination." Still, he concludes, the word is indispensable in certain endeavors. His analysis of 19th- and 20th-century pop culture phenomena may too fine-toothed for general readers, but clear, engaging writing increases the pleasure.