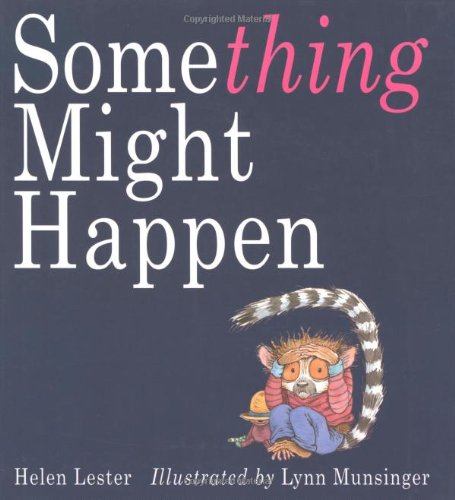 The name of the trembling star of this hilariously hyperbolic tale—Twitchly Fidget—alone will elicit giggles. This scaredy-lemur ranks right up there with prior endearing animal protagonists created by these collaborators, including the title characters in the Tacky the Penguin books and . Twitchly lives in a tactically designed hut made of leaves: "No windows or door. Something might want to get in. And no roof. After all, a roof could cave in." His bug-eyes emphasize his nonstop anxiety. Twitchly refuses to eat cereal, lest the crunchy noises startle him, causing him to bump his head on the lamp. "He [finds] his sneakers especially scary. Suppose he put them on the wrong feet and he had to walk cross-legged for the rest of his life?" Not surprisingly, this stay-at-home bloke turns down his pals' invitations to go out (he fears attending a parade, for instance, where he could easily "get bopped with a drumstick or sucked up in a trombone"). Something happen to this fearful fellow, but rather than the disaster he predicts at every turn of page, it is a "vidgit"—or visit—from his Aunt Bridget Fidget, who sets things right. Once again, Lester's and Munsinger's wry humor is impeccably in sync and on point. Twitchly just may teach kids who tend to twitch a lesson about facing fears. Ages 4-8.