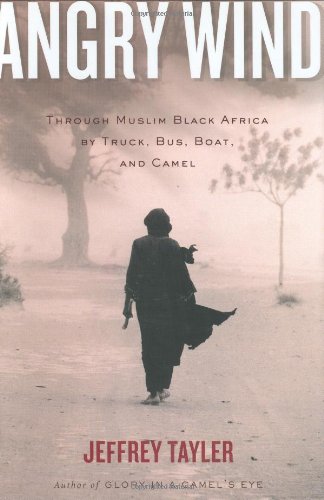 This engrossing narration of crossing the Sahel—the Saharan borderlands of Chad, Nigeria, Niger and Mali—by tortuous and frequently hair-raising local conveyances finds a barren, wind-scoured region, wracked by hunger, tribal conflict, animosity between Muslims and Christians and—a particular bane of wayfarers at border crossings—an infuriatingly corrupt and high-handed bureaucracy. Journalist Tayler ( ) is guilt-stricken by the appalling poverty and enchanted with a Tuareg tribal sword dance (" is how people were meant to live... shouting their joy into the wild night sky!"), but he generally avoids being overwhelmed by either the region's problems or its exotic charms. Indeed, his critical perspective makes him an often cantankerous presence. Fluent in Arabic and French, he is drawn into debates about religion and politics (President Bush's words and deeds are a favorite topic among Sahelian Muslims), skeptically cross-examines folklore about tourist spots, argues vehemently—with local defenders and Western relativists alike—against the persistent customs of slavery and female circumcision, and faces down bribe-hungry customs officials. Appreciative of the generosity and patience of the region's long-suffering inhabitants, he also sees their cultures as bogged down by dogma and fatalism. Vividly written and trenchantly observed, Tayler's account opens an everyday window on a world that the West normally confronts only in crisis. .