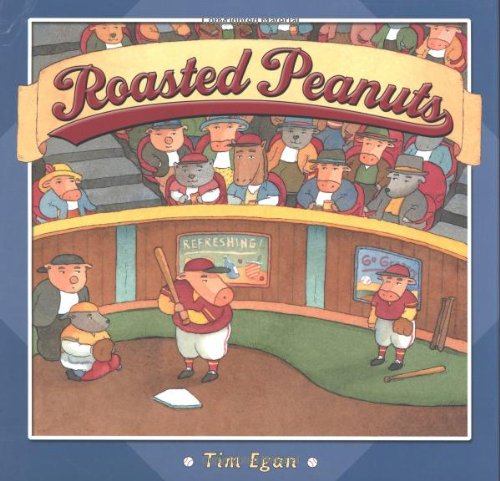 Egan's ( ) animal characters' small-town reticence and sly sidelong glances suggest a Keillor-esque wit at work. This homespun story introduces best friends Sam and Jackson, a baseball-loving horse and cat. Sam is "an amazing athlete"—an equine Natural—whose easy stance radiates composure. "Jackson was another story.... He was the slowest cat anyone had ever seen." Both try out for the local team, the Grazers, but Jackson (despite a powerful throwing arm) can't make the cut. A split-panel page shows the cat moping on his stoop while Sam, down at the field, gets ready to bat. Both are so unhappy that Sam strikes out repeatedly, and Jackson overhears the complaints. ("That horse is a disgrace," a bull gripes to a hippo, mocking fandom as well as the semi-peaceable kingdom Egan envisions.") Afterward, Jackson secretly takes a job as a roasted-peanut vendor, making use of that throwing arm. In a well-scripted moment of real-man camaraderie, Jackson reveals his presence by heckling Sam from the stands ("You see that stick you're holding?... You want to use that to hit the little ball they throw at you"). The delighted Sam duly hits a home run, and their buddy act becomes a main attraction. Egan invents a starry-eyed baseball legend of an earlier era, in which gentlemanly hues of sepia, loamy brown, mossy green and burgundy set the scene. The four-legged fans wear suit-jackets and hats, antique billboards line the stadium and—as in Egan's other books—sensitive stoics win the day. Ages 4-8.