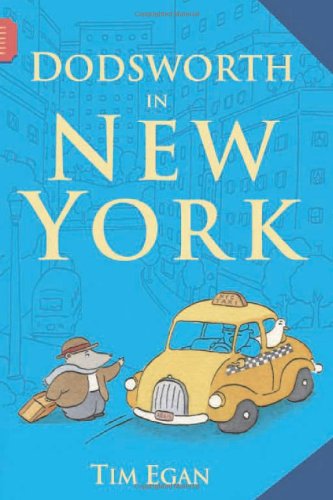 This droll stand-alone chapter book picks up where Egan's picture book left off, as Dodsworth, the formerly complacent mouse, prepares for adventure: “He wanted to see the world. But first, he wanted breakfast.” Dodsworth drops by the bistro from Egan's debut, , to order pancakes. But there he encounters Hodges's notoriously crazy duck, a plain white quacker with a yellow bill, yellow feet and steady gaze, who flings flapjacks at him until Hodges mercifully intervenes. Later, in a quaint sleeper car headed for Manhattan, Dodsworth opens his suitcase and discovers a stowaway—the duck. When they arrive and the duck hops on the subway, Dodsworth feels glad to be rid of him, then realizes he must retrieve Hodges's pet. Dodsworth inadvertently gets a grand tour as the duck takes a ferry to the Statue of Liberty (“ 'Why would a duck take a boat?' he wondered”), poses artfully at the Museum of Modern Art and takes a bus to Coney Island. Egan favors a palette of golds and clay-browns, and draws pillowy shapes in a gentle, never rigid line. For his nostalgic New York, he borrows scenery and fashions from the '40s and earlier. His polite cows, pigs and bears stroll the boulevards in suits and hats, making the unclothed, uncouth duck seem all the more delinquent. Egan keeps the hijinks low-key, preferring long pauses and slow burns to nutty slapstick, and spotlighting Dodsworth, the perfect screwball-comedy foil to Hodges's daffy duck. Ages 6-10.