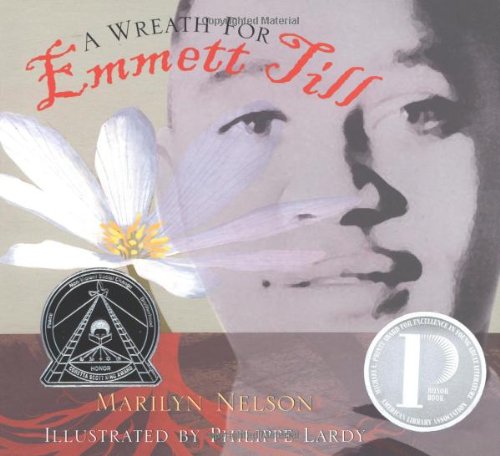 A WREATH FOR EMMETT TILL

Nelson's ( ) brilliant heroic crown of sonnets serves not only as an elegy for Emmett Till, the African-American boy from Chicago brutally killed at age 14 while he was visiting Southern relatives in 1955, but also as a compelling invitation to bear witness.

As the poet explains in a foreword, a heroic crown of sonnets is comprised of a sequence of 15 interlinked sonnets; each takes the last line of the previous sonnet as its first line, and the form results here in a eulogy both stately and poignant. One especially effective example of this transition occurs when the word "tears" moves from verb to noun: "A mob/ heartless and heedless, answering to no god,/ tears through the patchwork drapery of our dreams" ends one sonnet, which leads into the next, "Tears, through the patchwork drapery of dream,/ for the hanging bodies, the men on flaming pyres,/ the crowds standing around like devil choirs." Both the book's heartrending topic of murderous racism and the linguistically complex form require a sophisticated reader. Nelson's text suggests that readers must acknowledge their inhumanity so that they can make different choices: "If I could forget, believe me, I would," says the narrator. "Emmett Till's name still catches in my throat."

For his first book for children, Lardy's remarkable paintings capture the rising emotion and denouement of the historical event, and both text and art weave together the repeated phrases and colors that create a powerful, graceful whole. On a stark blood-red page, the five murderers appear as black crows, while Emmett's face looks directly at readers through a circle of barbed wire thorns. The image is later echoed with the ring of wildflowers that compose a brightly-colored funereal wreath. As if anticipating questions about the book's startling literary allusions and visual symbolism, author and artist both provide explanations. While the book does not flinch from depicting atrocity, in the end, it offers readers hope: "In my house," the narrator says, "there is still something called grace,/ which melts ice shards of hate and makes hearts whole." For those readers who are ready to confront the evil and goodness of which human beings are capable, this wise book is both haunting and memorable. Ages 12-up.