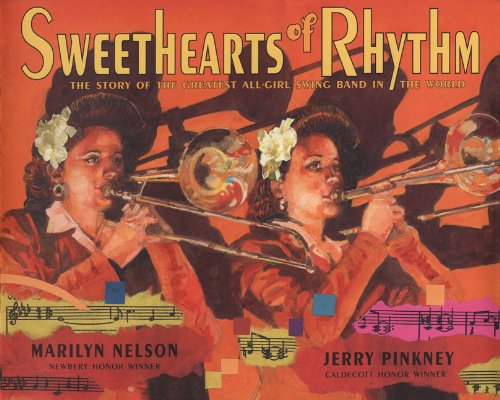 Sweethearts of Rhythm: The Story of the Greatest All-Girl Swing Band in the World

A Newbery Honor author ( ) and Caldecott Honor artist ( ) execute a masterful duet in this tribute to an integrated female band that toured the U.S. between the late 1930s and mid-1940s. In 20 poems titled after swing tunes, Nelson writes in the voices of the Sweethearts’ instruments, now gathered in a New Orleans pawnshop. Connecting music to greater human truths (some dark, some triumphant), the verse strikes nostalgic yet celebratory notes, underscoring how the band’s music delivered joy and hope during an era plagued by war and racism (“The jitterbug was one way people forgot/ the rapidly spreading prairie fires of war./ Man, the house would bounce when her licks were hot!/ We gave those people what they were dancing for”). Rendered in graphite, color pencil, watercolor and collage, Pinkney’s luminous, multilayered paintings superimpose snippets of musical notation on images of the musicians and audiences in full swing. Balancing these rousing scenarios are less uplifting but no less striking signs of the times: segregated sinks in a washroom, soldiers marching off to war. On all fronts, a resonant performance. Ages 10–up.