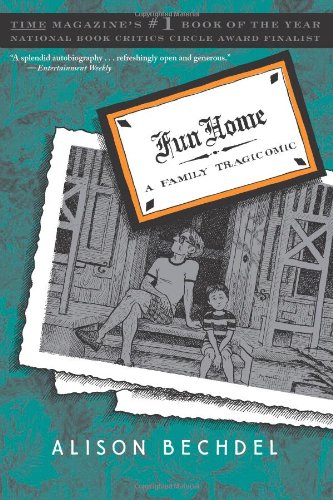 This autobiography by the author of the long-running strip, Dykes to Watch Out For, deals with her childhood with a closeted gay father, who was an English teacher and proprietor of the local funeral parlor (the former allowed him access to teen boys). refers both to the funeral parlor, where he put makeup on the corpses and arranged the flowers, and the family's meticulously restored gothic revival house, filled with gilt and lace, where he liked to imagine himself a 19th-century aristocrat. The art has greater depth and sophistication that Dykes; Bechdel's talent for intimacy and banter gains gravitas when used to describe a family in which a man's secrets make his wife a tired husk and overshadow his daughter's burgeoning womanhood and homosexuality. His court trial over his dealings with a young boy pushes aside the importance of her early teen years. Her coming out is pushed aside by his death, probably a suicide. The recursively told story, which revisits the sites of tragic desperation again and again, hits notes that resemble Jeanette Winterson at her best. Bechdel presents her childhood as a "still life with children" that her father created, and meditates on how prolonged untruth can become its own reality. She's made a story that's quiet, dignified and not easy to put down.