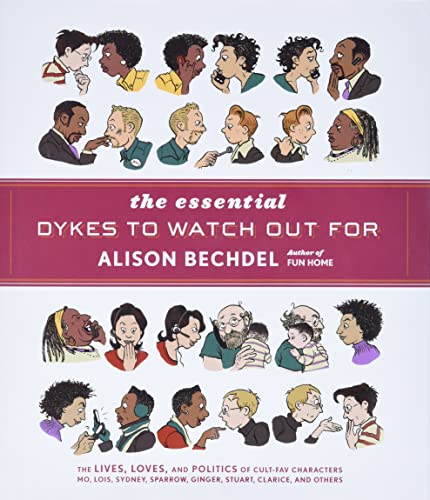 The Essential Dykes to Watch Out For

This ongoing comic strip chronicles the lives of a tight-knit group of lesbian friends over an astounding 21 years of life, work, love, boredom, political activism and countless reversals of fortune. At its heart are six women: the promiscuous Lois, a feminist bookstore clerk with a penchant for gender-bending; her two roommates, the overworked academic Ginger and self-identified “bisexual lesbian” Sparrow; their domestically partnered friends Clarice and Toni; and Mo, who despite (or perhaps because of) her frequent politically charged outbursts of neurosis is the hub of her circle. These characters, flawed but endearing, are brought to life by Bechdel’s quirky artistic sensibility. Facial expressions are carefully nuanced, and she seems to take great joy in using small details to differentiate emotions. Late in the collection, when a character receives treatment for cancer, a tiny caret in her cheek is enough to transform her from a fresh-faced mischief-maker into a sallow and frightened chemo patient. What cannot be overemphasized is the sheer scope of the collection, which follows these women from idealistic young adulthood to contentedly disillusioned middle age and, for some, parenthood. All eventually end up a little more haggard than they began, but there isn’t one whose Bechdel-illustrated bags under her eyes were not hard fought for and hard won.