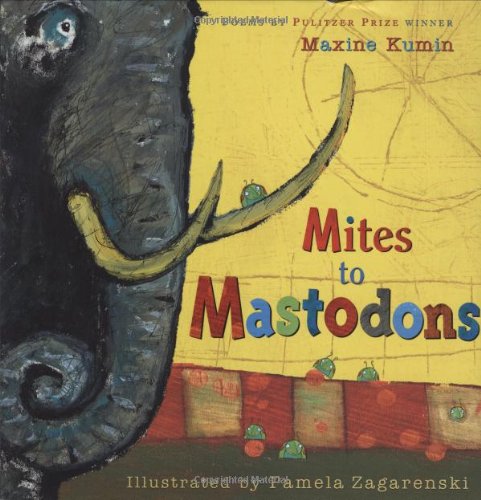 Mites to Mastodons: A Book of Animal Poems

Kumin ( ; , for adults) returns to children's lit with 19 poems that rove from whimsically anthropomorphic to factually accurate. Arranged by the size of the creature described, the first 10 poems—featuring tiny mites, the snail, polliwog, gray squirrel and cat, among others—appear on single pages, while the final poems, which muse on larger beasts such as the manatee, camel and kangaroo, merit longer treatments and full spreads. Kumin sometimes utilizes familiar conventions for children's poetry, as in the rhymed couplets of "Rabbit" ("Nobody needs to wait while he eats/ his Brussels sprouts or cabbage or beets"). But there's much that's fresh and subtly challenging for kids, too, as with her frequent use of near rhyme. In the 12 fact-based couplets of "Octopus," an authoritative narrator opines: "The plural, when there's more than one,/ is . When fully grown/ they range from tiny—half an inch—/ to ones who could eat you for lunch." Zagarenski (the Good Beginnings series) takes an artistic leap here, with full-bleed illustrations that amalgamate a crazy quilt of techniques, from collage to computer graphics. Her animals range from the cartoonish mites to a more realistically rendered alligator (who nonetheless sports a crown). Indeed, many of the creatures wear hats or pants, independent of whether Kumin has humanized them or not. Given the poetic and artistic liberties taken, a single font would have served to unify the collection. What consistently comes through is both the author's and artist's exuberance for their subject. Ages 4-8.