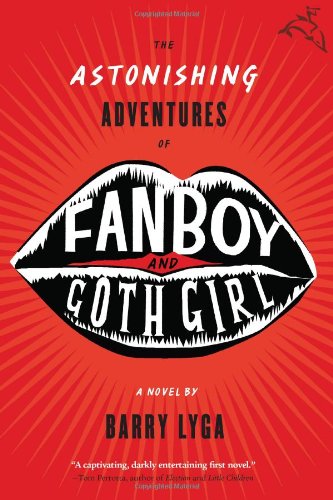 The Astonishing Adventures of Fanboy and Goth Girl

Life is pretty dismal for the geeky 15-year-old narrator of Lyga's debut novel, who will quickly win over readers. He is mostly ignored by his beer-guzzling, gun-toting stepfather (aka "step-fascist") and pregnant mother (who still calls him Donnie), and harassed at school. His only friend, Cal, ignores him whenever the popular guys come around. Then a goth girl named Kyra sends him a surprise email, and he finds someone to talk to about everything from comics to their disdain for their classmates ("Someone could walk through the halls with a machine gun and kill ninety-nine percent of the people in that place and I wouldn't care," Kyra says). He even shows her the graphic novel he is hoping to publish so he can "get away from here. Start new somewhere else." But while Kyra is always blunt and angry, "fanboy" (as she calls him) begins slowly to piece together just how troubled she is. The story unfolds slowly, and a few resolutions seem scripted, such as the narrator making sudden peace with the step-fascist. But fanboy's comic book obsession feels authentic, in the way he describes famous authors, the difficulty of creating a comic ("You have to decide if the words are important enough to cover up the artwork that's telling half the story"), and even life inside a comic-book convention. His relationship with Kyra seems real, too; they are both truly outsiders, full of confusion and pain ("I don't know how I got here," he says during their big fight. "I don't think she knows, either"). In the end, there is plenty here to keep readers engaged. Ages 14-up. Agent: Kathleen Anderson, Anderson Literary Management.