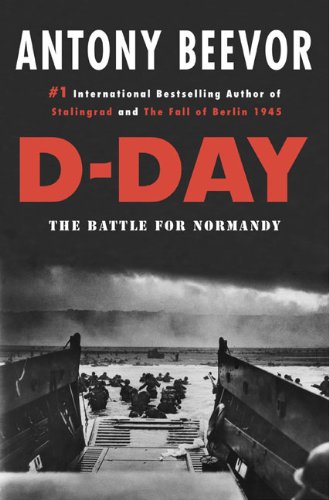 D-Day: The Battle for Normandy

Beevor has established a solid reputation as a chronicler of WWII's great eastern front battles: Stalingrad and Berlin. In addressing D-Day, he faces much wider competition with historians like Stephen Ambrose and Max Hastings, who also use his method of integrating personal experiences, tactical engagements, operational intentions and strategic plans. Beevor combines extensive archival research with a remarkable sense of the telling anecdote: he quotes, for example, an officer's description of the “bloody mass of arms and legs and heads, [and] cremated corpses” created by artillery fire as the Germans tried to escape the Allied breakout. He is sharply critical of senior commanders on both sides: Bernard Montgomery's conceit; Adolf Hitler's self-delusion; Dwight Eisenhower's mediocrity. His heroes are the men who took the invasion ashore and carried it forward into Normandy in the teeth of a German defense whose skill and determination deserved a better cause. The result was a battle of attrition: a “bloody slog” that tested British and American fighting power to the limit—but not beyond. Beevor says that it wasn't Allied forces' material superiority but their successful use of combined arms and their high learning curve that were decisive in a victory that shaped postwar Europe. Maps, illus.