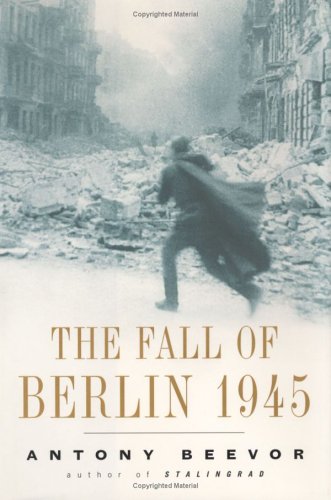 Covering the months from January to May in 1945, as Soviet and other Allied troops advanced to Berlin, freelance British historian Beevor () opts for direct narrative with overheard quotes from the main players, making the reader an eavesdropper to Hitler and Stalin's obiter dicta. Brisk and judgmental, the narrative is studded with short sentences and summary judgments: about Nazi minister Hermann Göring, we are told that his "vanity was as ludicrous as his irresponsibility" and he looked more like " 'a cheerful market woman' than a Marshal of the Reich." During the rubble-strewn city's Christmas of 1944, "the quip of that festive season was: 'be practical: give a coffin.' " The book is based on material from former Soviet files as well as from German, American, British, French and Swedish archives, but the somewhat limited bibliography is disappointing, and many of the usual sources are quoted, such as Hitler's personal secretary, who took dictation in the bunker to the end. Her expectation that Hitler would suddenly produce "a profound explanation" of the war's "great purpose" says as much about German self-delusion of the time as about Hitler, but here and elsewhere, Beevor simply quotes her flatly and fails to connect the dots. However, given the scope of this book—the 1945 advance on Berlin is thought to be the largest battle in history, with two and a half million Soviet troops attacking one million Germans—the summary approach is inevitable.

Enemy at the Gates