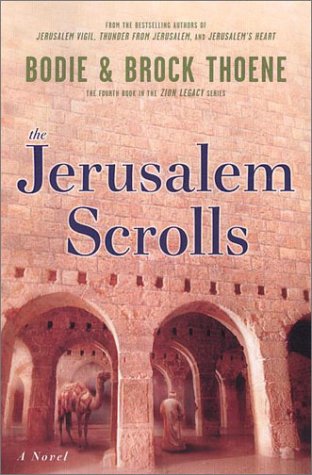 The Thoenes continue their Zion Legacy series (; ; ) with the fourth installment. Ambitiously plotted to encompass two different settings, the novel opens in 1948 in the midst of violence and strife, as Jewish Jerusalem falls to Arab forces in Israel's war of independence. Haganah commander Moshe Sachar takes refuge in a secret, underground chamber and examines a hidden biblical-era text. The text's narrative—which occupies most of the rest of the novel—concerns the stormy romance of a Roman soldier, Marcus, and Miryam, a young Jewish widow. Their story captures the turbulence and swirl of ancient Israel and details the rise of Yeshua, the mesmerizing preacher from Nazareth. The authors' basic New Testament narrative isn't excessively artful, but the well-researched historical detail and smooth prose paint an evocative picture. The stories of personages large and small—Yeshua, Herod, Pontius Pilate, Yochanan the Baptizer, as well as Miryam's long-suffering nurse, Tavita; Marcus's loyal aide, Carto; arch rival Vara; and the sympathetic Roman politico Felix—are effectively woven together. The novel's Christian slant may or may not be to readers' tastes, and the occasional lapse into -like purple prose ("She willed him to remember, to awaken in the night and long for her") only detracts. But the authors are successful at what they set out to do, and perhaps the two settings—ancient and modern Israel—aren't so divergent after all.