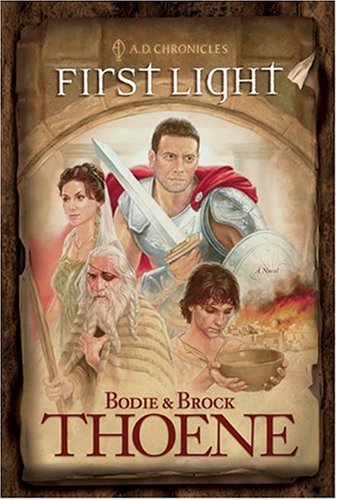 Although , book six in the Zion Legacy series with Viking, was supposedly the conclusion, this new offering from Tyndale picks up the same basic story line and many familiar characters. It's now 2002, and Moshe Sachar takes his youngest son, Shimon, through a secret passage to an underground library chamber. There, Shimon is shown a cache of 70 scrolls and told to begin studying the fourth (other scrolls were the premise of earlier books in the series). The words of the document begin, "Those who lived in darkness have seen a great light..." Several pages later, the novel's time period changes to that of the document—New Testament times—where the story revolves around a young blind beggar named Peniel. Other familiar characters from the earlier series, including Zadok, Miryam, Nakdimon and Marcus Longinus, make appearances throughout. The text, which is a retelling of New Testament events and history at the time of Christ, is heavily padded (Peniel is repeatedly visited by Old Testament characters, and their stories retold), and the pacing drags. Although the Thoenes are veterans of historical fiction, this plot sags under the weight of choppy dialogue and one-dimensional characters. CBA readers may recoil at some fairly gruesome incidents, as when Susanna bat Maccabee carries what she believes is her lover's heart around with her in a jar, or when another character is viciously blinded with a hot dagger. While hardcore Thoene fans will add this to their collections, many readers' patience will be sorely tested by this too-long rehash of scriptural stories.