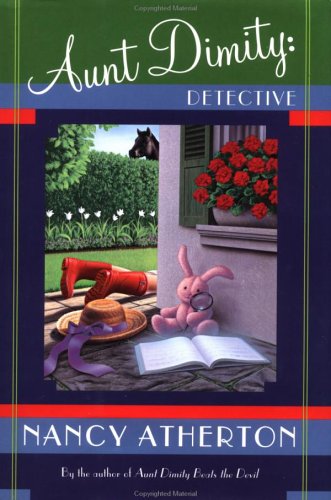 For an American, Atherton nicely captures the British cozy spirit, but her ghostly gimmick is not for every taste. In her seventh appearance (after 2000's ), Lori Shepherd, her husband and two-year-old twins have returned home to a cold, rainy English April after a three-month family visit to the U.S. to find that there has been a murder in Finch, their idyllic Cotswold village. Prunella Hooper—"Pruneface" to most villagers—was found dead of a blow to the head in her home, Crabtree Cottage. Given her malicious nature, the residents of Finch aren't surprised by her death; in fact, they seem relieved and yet are strangely reticent to come forward with any information. The list of suspects seems endless. So, with the aid of the Pym sisters' gingerbread cookies (a recipe for which is provided at book's end) and the sage advice of phantom counselor Aunt Dimity, who appears to Lori supernaturally on the blank pages of a journal, Lori and the vicar's nephew, Nicholas, begin a quest to unearth the truth behind the murder. In the process, they uncover a multitude of village secrets, including a few pertaining to themselves. With eccentric village characters, a tightly woven, well-executed plot and a spunky heroine, Atherton has created a cozy as spicy and zestful as the Pym sisters' gingerbread. Series fans are sure to be pleased. For some, however, the fantasy of Aunt Dimity is like the edible gold leaf on the cookies—a nice touch if you like it, but it would taste better plain.