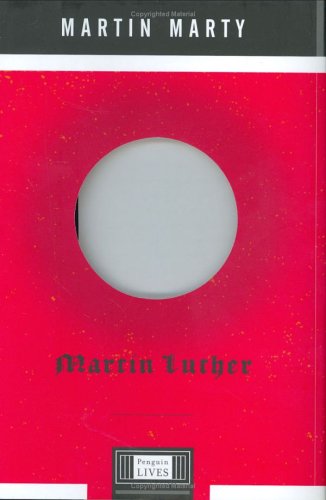 Marty, professor emeritus at the University of Chicago and winner of the National Book Award for , offers a sterling biography of history's irascible reformer. In concise, accessible style, Marty outlines Luther's life and times, gauging why this man changed the face of Europe and Western Christianity. Marty excels in distilling debates that were matters of life and death 500 years ago but seem obscure to Christians today. Although the celibacy of the clergy is a controversy that no contemporary reader will need explained, other issues such as infant baptism, communion in both kinds (the laity receiving both the bread and the wine) and justification by grace through faith are made accessible by Marty's skillful narration. He depicts Luther as a "man of extremes," bound up in contradictions. Marty wryly notes that Luther's biographer is doomed to qualify any statement about him with the phrase "at the same time." The theologian was tender, yet at the same time blustery and arrogant; he could be a superbly cogent thinker, yet near the end of his life he published a horrific attack on Jews that unthinkingly drew upon "traditional Christian rumors" and "whispered claims" about alleged Jewish atrocities. Even his beliefs seemed rife with contradiction: Christians were simultaneously justified and sinners; they were perfectly free but bound in service to all; God was both revealed and inscrutable. Marty is sensitive to Luther's deep, lifelong quest for theological assurance and his struggles with doubt. This is the best brief biography of Luther ever penned.