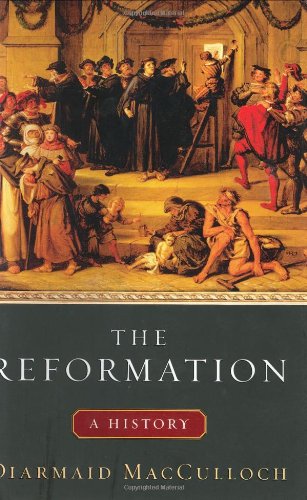 THE REFORMATION: A History

Many standard histories of Christianity chronicle the Reformation as a single, momentous period in the history of the Church. According to those accounts, a number of competing groups of reformers challenged a monolithic and corrupt Roman Catholicism over issues ranging from authority and the role of the priests to the interpretation of the Eucharist and the use of the Bible in church. In this wide-ranging, richly layered and captivating study of the Reformation, MacCulloch challenges traditional interpretations, arguing instead that there were many reformations. Arranging his history in chronological fashion, MacCulloch provides in-depth studies of reform movements in central, northern and southern Europe and examines the influences that politics and geography had on such groups. He challenges common assumptions about the relationships between Catholic priests and laity, arguing that in some cases Protestantism actually took away religious authority from laypeople rather than putting it in their hands. In addition, he helpfully points out that even within various groups of reformers there was scarcely agreement about ways to change the Church. MacCulloch offers valuable and engaging portraits of key personalities of the Reformation, including Erasmus, Luther, Zwingli and Calvin. More than a history of the Reformation, MacCulloch's study examines its legacy of individual religious authority and autonomous biblical interpretation. This spectacular intellectual history reminds us that the Reformation grew out of the Renaissance, and provides a compelling glimpse of the cultural currents that formed the background to reform. MacCulloch's magisterial book should become the definitive history of the Reformation.