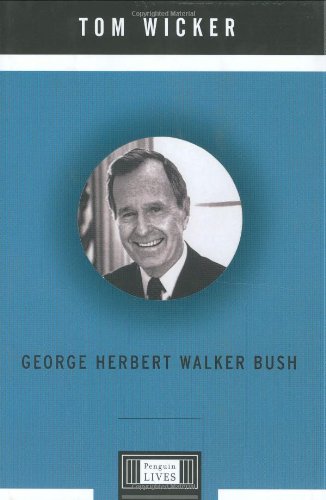 The opening anecdote sets the tone for this uncomplimentary brief bio: Wicker recounts a visit by an (unnamed) friend to the post-presidential office of George H.W. Bush in Houston. The two men share an hour of purposeless small talk, prompting the friend—and the author—to reflect that the visit is a microcosm of the life of Bush, who seemed to have no strong purpose other than "a burning desire to become president." The rest of Wicker's biography sketches Bush as a man with the faults and virtues of his patrician background: loyalty, gregariousness, personal modesty, intense competitiveness, a shallow mind and a deep sense of entitlement. His credentials for the White House, Wicker notes, were scanty; the author dismisses Bush's impressive-looking résumé (two-term congressman, U.N. ambassador, CIA director, GOP chairman, Reagan's vice-president) as padded with thankless jobs proffered by presidents who found him harmless and pliable. He credits Bush with two impressive acts: daring to recommend resignation to President Nixon (before the entire cabinet, no less) at the climax of the Watergate scandal and forging the global coalition that drove the armies of Saddam Hussein from Kuwait in 1991—a feat of diplomacy, Wicker notes, made possible by Bush's lifelong skill at befriending practically everyone. But veteran journalist Wicker faults Bush for what the author categorizes as a readiness to alter positions for political advantage and repeated use of "low blows" to attack electoral opponents like Bob Dole and Michael Dukakis (behavior that, he claims, Bush would never have tolerated on the tennis court). For those who lived through the Bush years, the story Wicker tells is a familiar one, here usefully if briefly summarized; for others, this account will provide a handy starting point for further study of the Bush legacy.