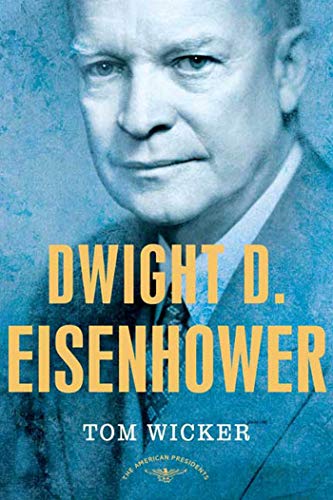 The latest in the American Presidents series of brief biographies (edited by Arthur Schlesinger Jr.), journalist Wicker's chronicle of Eisenhower offers a solid account, plus a unique personal view, of the much-loved and maligned politician. Wicker (), who covered politics for the for 30 years, spent a week with Eisenhower in 1962. Wicker had been a left-leaning Stevenson supporter and critic of Eisenhower's policies in the 1950s, but he found himself entranced by the ex-president and by the end of the week became a lifelong booster of Eisenhower the man, if not Eisenhower the president. Wicker says he has tried to factor out his personal fondness for Eisenhower while composing this biography, and he does manage a lively evenhandedness—not an oxymoron in this circumstance—in weighing the accomplishments and pitfalls of his administration. Only a few pages are devoted to his first 62 years on earth—the real beginning is Eisenhower's 1952 presidential campaign. A fine introduction to 1950s political history, the biography covers the domestic and international crises that occurred on Eisenhower's watch, including the Supreme Court's decision to racially integrate public schools, the poisonous influence of Sen. Joe McCarthy, tensions with the Soviet Union and the threat of nuclear war. Thanks to Wicker's limber prose (his talents as an oft-published novelist are on display), careful research and personal touch, the learning is easy.