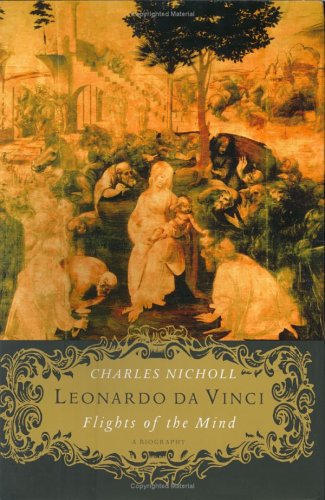 Nicholl aims for the man behind the myth in this penetrating, highly detailed biography, which recognizes da Vinci's "mysterious greatness as an artist, scientist and philosopher" but avoids hagiography (and nearly steers clear of the word "genius"). The illegitimate child of a Tuscan peasant girl and a local notary, da Vinci (1452–1519) was apprenticed as a teen to Florence sculptor Andrea del Verrocchio. Nicholl ( ) conjectures convincingly about Leonardo's early career, though he tends to dwell overlong on technical aspects of Renaissance art production. Leonardo established a Florentine studio in 1477, but it was not until he moved to Milan five years later that he began to produce his iconic works: the painting , the famous Vitruvian Man drawing. Nicholl chronicles the production of and makes a firm statement about the 's identity. Numerous questions about Leonardo's life remain, unavoidably, unanswered, but Nicholl fills in the gaps with insight into the artist's cultural milieu, offering tidbits about Leonardo's sexuality, the sordid goings-on at the Borgia court and the multifarious fruits of the artist's astonishingly fertile curiosity and imagination. Nicholl's attention to da Vinci's polymathic pursuits, as well as his own translations from the artist's numerous notebooks, are some of this dense but readable volume's most compelling aspects. Illus.